Home > Journal > Why Is My Boiler Making A Loud Vibrating Noise? 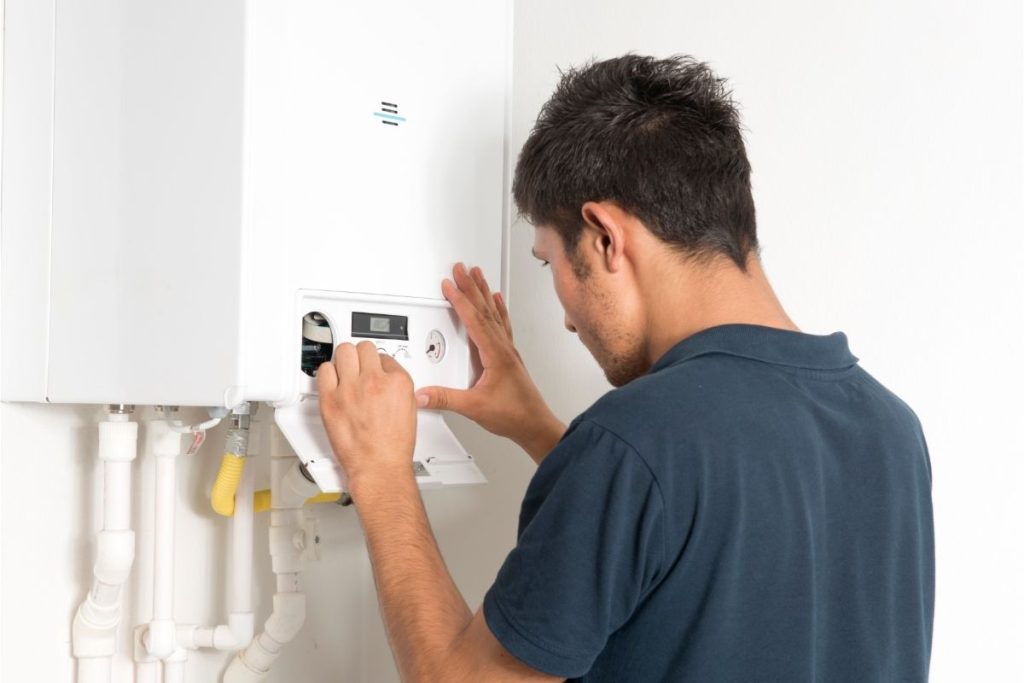 Your boiler should work discreetly and simply hang on the wall without you needing to worry about it yet when it begins to emit a loud noise, and even vibrate, you are obligated to find out why.

Diagnosing the problem swiftly is imperative to getting it fixed as soon as possible and there could be several reasons why it looks to be malfunctioning.

These reasons could include trapped air and creaking pipes as well as straightforward reasons being that the radiator heads are off and a gradual build-up of limescale.

In this guide, we will look at the possible reasons why a boiler is making a loud, vibrating noise and what you can do about it.

You may hear banging or gurgling from your boiler which is the result of trapped air. Airlocks in a central heating system can occur due to the natural process of water being heated and then cooled which can occur when you are running hot water.

If you do hear the banging, try fitting a bleed screw to the pumps to release any trapped air. You should also see this as a major indicator that you need to bleed the radiators too just in case.

If there is a noise when the boiler is off, this could be down to creaking pipes. They may even tap, click, bang, or knock and it may not be attributed to the boiler but the heating pipes themselves.

Should the pipes not be securely held, they may move when the hot water begins to travel through them and creak or bang against certain surfaces, including walls.

To remedy this noise, you may want to use pipe clips to secure them or install new pipework, especially if you have limescale build-up in the heating system.

A boiler making a banging sound could well be caused by already hot water that has been overheated. If limescale has built up on the heat exchanger or the boiler thermostat is faulty then the boiler can inadvertently overheat too.

A whistling sound can also be down to limescale build-up, particularly in hard water areas and blockages can occur in the pipes and parts of the boiler. The whistling sound is also known as ‘kettling’ as it sounds like a traditional kettle once the water comes to a boil and such a problem cannot be ignored, especially with such a noise.

You may want to bleed the radiators to get rid of some trapped air yet flushing the system may work better to remove some debris, such as limescale. If a plumber is called to investigate the problem then this could be the best time to consider installing Wundatherm Smart Hub as a smart heating control system.

Radiator Heads Are Off

If the hot water is travelling around your central heating system, gaining in heat and returning too hot then this could create an issue for your boiler.

This overheating is another cause for ‘kettling’ so performing a quick inspection of the radiator heads could diagnose the problem really swiftly.

Without an adaptive pump or an autobypass valve, you really can begin to notice the various noises your boiler can make when it does not have such controls in place. The adaptive pump helps move the hot water around your central heating system, including the radiators.

This is an integral part of the system to ensure that fresh hot water gets to a room promptly and that your boiler is not overworked.

The autobypass valve works similarly to control the flow of water in the heating circuit based on the water pressure across it. This process helps maintain the minimum flow rate through the boiler while also limiting the circulation pressure when the other water paths are closed.

Without an autobypass valve, the flow noise could simply get louder and louder without having that specific device to regulate it.

Why Is My Boiler Making A Noise Before I Even Turn It On?

While some noises are caused by the movement of water around the heating system, there is also the pre-heat function. This sound occurs with a lot of combi boilers and is when the heat exchanger fires up from time to time simply to ensure it is primed to produce hot water when needed.

A more concerning noise would occur every couple of minutes and could indicate ‘short-cycling’ which occurs when the thermostat tells that the heat exchanger is cooling at the point of your home reaching the desired temperature.

The noise would also be a sign of your boiler being overworked as it is constantly attempting to heat up a small amount of water.

Should I Be Concerned About A Humming Noise Being Made By My Boiler?

Not particularly no, as the humming is typically the noise a boiler should make when hot water is being pumped around your home.

This is usually when the heating is on or a shower is being run yet if it seems distractingly loud then it may be that the circulating pump is operating too fast so you may want to set it to go at a lower speed.

Several reasons could be the cause of your noisy, vibrating boiler and these could include the radiator heads being off and trapped air but also more serious issues such as limescale build-up and creaking pipes.

Should your boiler be making a loud noise and vibrate from time to time, you could call out a plumber and consider getting an adaptive pump or autobypass valve installed.

As the plumber investigates the boiler, this is an opportune time to upgrade your controls to install a smart heating control system such as a Wundatherm Smart Hub so you have a better means of detecting and resolving problems with your boiler.